Last night was (菊水）Kikusui's third foreigner zadankai (and my third too!.. what a zaru I've become). And for the first part, we tasted nihonshu and were filmed by the one and only NHK (which will apparently be airing our segment at 6:10 on June 23rd....). It was really nerve wracking, actually... I thought they'd have some 元気 producer running around asking questions, but instead they had these two stoic camera men with a giant boom mic and the most まぶしい (bright) camera light ever. I'd start telling Yoi (the Kikusui Rep that I was sat next to this time) something about the sake that I liked or didn't like, and they would RUSH over as fast as they could with their camera. I couldn't help but giggle every time I had a camera in my face. That, and I completely forgot Japanese when the camera was right there.... it just wouldn't come out. It doesn't help that I'm not really familiar with many taste words in Japanese, either. I should study up with De-. 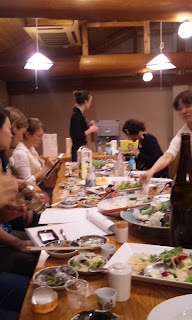 Anyway... because I promised De- to come with her later in the week to film a bit about drinking sparkling sake, I pretended in front of the cameras that I didn't like sake at all... which is a lie, because I've actually really come to appreciate a good sake and I love all the sweet products that Kikusui makes. But yeah, I had to fake it in front of the cameras and "whine" about how I've never tried hot sake before (LIE, I work for the fucking government.... in KOCHI, of course I've had hot sake shoved down my throat before!) and that I didn't like how the flavor changed and seemed stronger once it was hotter... MEH. At least they finally went away from me and some point and started interviewing Matto and De- again. 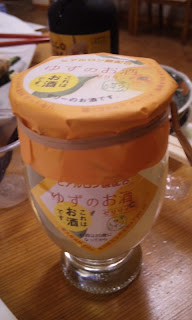 Once they were gone, the party got started, and we tried all the yummy drinks, the sherbet, the JELLY!!! and some new products they were producing for sales in Europe (apparently a request! How cool~). Those were especially interesting because it seems like they are trying to introduce a Chu-hi-esque drink to Europe. I think something like that would sell super well in the U.S! I always find that the thing newbies to Japan from the U.S always squeal over is the good taste and relatively high alcohol content in Chu-hi. It's like an alcoholic soda, right? Especially my female friends seem to like them. The flavors Kikusui had come up with were also much more interesting than normal Chu-hi flavors. In addition to the standard lemon and grapefruit, they had lime, green apple, raspberry, strawberry, grape etc (11 in all)... the strawberry was disgusting tasting but I loved green apple and lime! Step it up, America! :<

They also had a new alcohol they were calling "Mint Julip" but... it tasted more like mint mugi-cha instead of more mohito-y which is what I expected. Eh, it's in development.
Posted by Indi at 9:54 AM