Next Stop on the Shikoku Express

The last two weekends have been busy with shows, and this next weekend marks the last in making our rounds of Shikoku (3.17 Ehime, 3.25 Kochi, 3.31 Kagawa 4.7 Tokushima). While our Kochi show did not have the best turn-out (and me and Matto had to pay 8000 yen out of pocket because we live in the prefecture?! Just because T. set up a poorly-attended show should not mean we have to pay him for it! >:| ), it was still a fun show, and for once we didn't have to get on the highway and drive.


This last weekend we had a show in Takamatsu at this little place called Blowin'Bar. It's a really new live house/bar and it even still had the smell of "new" floating around inside. We all got to the city early in order to eat Kagawa Udon (<3<3<3), see the castle ruins, and practice for an hour and a half at this sketchy little studio. Our usual supporting guitarist had a show with his other band the same night, so we asked someone else to help us out and needed a little more time to get everything solid before the show (plus! We decided to do a cover from Alkaline Trio, "Nose Over Tail").

There were only three sets for the whole show (Us, Parkmates, and the guitarist from Cheap Audio doing an acoustic set), but surprisingly a lot of people showed up, and the after party was a blast :) I love it when we don't have to go anywhere for the after party and we can just leave stay in the venue and be goofy.

The next day me and Matto toured around Takamatsu for awhile with the guitarist from Parkmates. I've been to Takamatsu three times now and have never properly driven around the city. We ended up eating more udon (curry udon FTW!), going to an amazing natural food store (that had really good soy milk, soy yogurt, and even had dairy-less margarine!!!), and walking around Ritsurin Kouen, this gorgeous park near his house that's a popular tourist location. It had some of the prettiest wooden bridges and flowered paths I've ever seen! The Sakura were also just beginning to bloom so people were out hanami-ing in the open stretches of lawn. I can't wait to do hanami!! If it's possible, and the weather is nice, I'm hoping that we'll all be able to picnic together Sunday afternoon in Tokushima~ 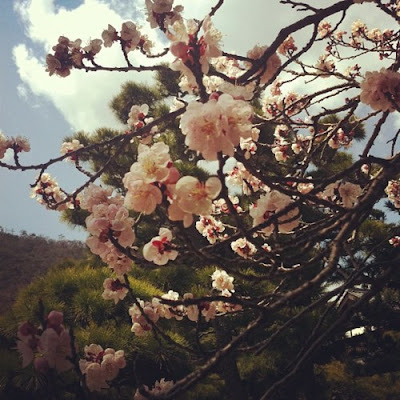 Changing of the Guard

April has come, and with that, what I like to call the "changing of the guard." Really, as anyone who works as a "komuin" or a government worker knows, April marks the end of the fiscal year here in Japan, as well as the beginning of the school year. I can at least vouch for city offices and schools by saying that once April hits, a number of lucky (unlucky?) people get shuffled around the city office/the prefecture to do different jobs/work at different schools. I lost a lot of great teachers this year to the "Great Shuffle".... but I also gained a few good ones that fellow English Teachers have vouched for. :)

On the first day of the month (that falls on a week day), new city workers (including firefighters) get corralled around the city office to give greetings to the other departments, and new members (that have just shuffled around the office to new positions) greet their new co-workers within the same department. This is also the time where new teachers to the city come by the Board of Education to say hello, yoroshiku..... etc to the education movers and shakers (which is where my desk sits but I would hardly include myself in the 'movers and shakers' category).

What I don't understand about this system is... why people change jobs so drastically. Within the city office, people will go from working for the water works department for 4 years to all-of-a-sudden being the head of the Board of Education. If that water works person was doing an awesome job (at there job), then why move them to something where they have to completely re-learn everything?! It seems like poor time-management to me....

I have, however, kind-of gotten used to the "Great Teacher Shuffle". While I think it's cruel to move teachers with families from (ex:) one city in the East of the prefecture all the way to the West most part of the prefecture (they can't uproot their families every year just because this system is silly!), I understand the ideology behind it. That being, "Good teachers shouldn't be hogged by one school" and things like that. Of course, while I understand it, I still don't like it. Nor do I like having to introduce myself to a batch of new teachers who assume I'm illiterate and can't speak a word of their language... but alas, this is why I am leaving this line of work come July~
Posted by Indi at 4:20 PM No comments: