Friday started off this fantastic weekend with a FREE (無料！) sake tasting and dinner at a nice little Izakaya in the city~ (worst part of the night was having to take the train back... but honestly not bad. especially since it was the BEST TRAIN RIDE EVER). Kikusui was putting on a sake tasting for the foreigners of Kochi so many East-siders and some Kochi-ites came out to get hammered and dine with the great De- and her awesome company. We tried 15 different sakes (sake, shochu, hard liqueurs, sweet liqueurs, Korean liqueurs, and some in-the-making liqueurs) and had to write comments about each one we tasted. Considering I'm not a huge fan of sake... there were some really decent sakes being distributed and I was proud to make some helpful comments. The Imo-shochu was the hardest to drink, and I couldn't get past the 2nd sip of it (just too damn strong and NASTY). The best group of liquers was the sweeter ones. There was a Korean liqueur that tasted like a banana-smoothie, a honey liqueur that was AMAZING, a yuzu liqueur that tasted like lovely juice, and an Ume-shu which had syrup residue dripping from the sides of it. My favorite, however, was this champagne-esque sake that was in the still-in-the-making group of liqueurs. I miss champagne so much.... I drank most of the bottle of O1 (O2 was not sweet enough. O1 was PERFECT). We got to take some of the left-overs home, and each got a cute bottle of sake as gifts. The food for the event was also verrrryyyy good, and included some lovely salad, sashimi, edamame, karage, and cha-han). After that, me, Bee, Orlan and Sea left on the train (much fun was had... we played Janken half the way, and then made up some stupid story the rest of the way) and went out to Pieno after for some Karaoke. At Pieno, as usual, all of the Aki "youth" were out, and I got to see crazy Natsuki again (from the last drunken outing we had). Poor Orlan had to do battle with some drunk Japanese guys and arm wrestle all of them multiple times (as well as protect his man-hood from prying hands). I got called cute by some attractive guys (huzzah!), even though they were 28/29 and not the 25 I always hope when I see the "youth" of Aki-city. 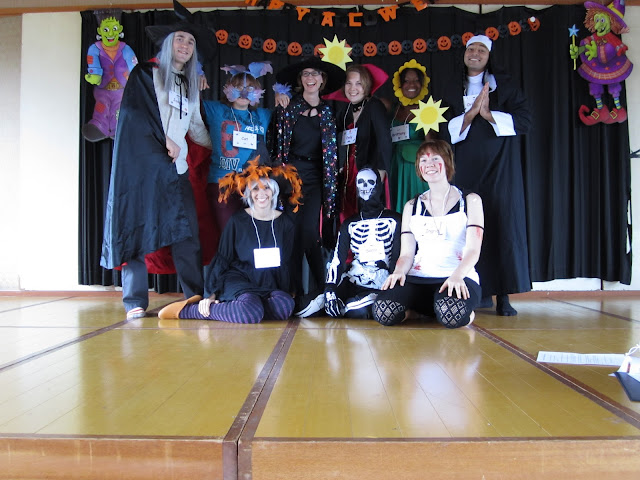 On Saturday, The Brit arrived at my house around 12:30 and then we all headed over to the community center to help out with S-Ono's Aki-children Halloween party. We did some prep work, tried on costumes, and surveyed the area that we would be trick-or-treating in before coming back to the center and getting ready for the children to come at 3:30. Once they all came, we broke into 5 groups and went out trick-or-treating. I got to be one of the photographers for the event, so I didn't have a group and instead got to run around and laugh at everyone else as they struggled to keep their children in line. None of the kids knew that I was princess mononoke (not their generation I guess... wtf), and one kid asked me why I was wearing a towel (It was an APRON fool!!). Anyway, after trick-or-treating, we all came back to the community center for games and a cape-design contest. They were very impressive capes (even though they were made from garbage bags).

Art Islands and a revival of my artistic spirit

This last weekend, me, Sea, De-, and Bee took a little road trip up to Takamatsu in Kagawa Prefecture to see the Setouchi International Art Festival (Inner Islands). Friday, after work at 7:00 we all took off from Dana's place and started the 3 hour drive up to Takamatsu. Luckily, a few weeks prior, I had e-mailed the CIR of Kagawa so that I could see if he knew anyone that would put up 4 strangers. What luck! Two people offered up their homes to us and we took to the home of "James" Justin outside of Takamatsu and only 30 min from the port! :) His house smelled like moth balls..... but that was well worth getting to crash in a place for free.

The rest of the weekend was full of beautiful art and island hopping that I'm too tired to go into right no. :P
Posted by Indi at 10:16 PM No comments:

Hang Ten (or at least get up to your knees!)

FANTASTIC WEEKEND.
This weekend started out fantastic, ended fantastic... couldn't have asked for better, really. :) It started off with a nice rainy half day at home (I took off from work because I had Daikyu to take and just took the rest of the 3 hours off too). It was really lovely to sleep in, laze around, get my paper products strung together, clean, buy some stuff for the house, and get ready for the rest of the weekend. That night, was eating and drinking at its best. Me, Bee, Ireland, Scotland, and Jar went to Nahari hotel to eat and drink all we could for 3500 yen at a Hokkaido food festival. It was basically like a giant enkai. The food was buffet style, so you could go up and get as much as you wanted, and the drinks were endless (delicious Ume-chuhi and beer). The food was stupendous, there was this one dish I wish I could have eaten more of. It was potatoes, salmon, veggies, and CHEESE baked in a dish. There was also amazing crab nabe and circular koroque. Me and Jar and Ireland sang Karaoke songs when it came to that part of the night, and I challenged Jar's co-workers in hashiken (the janken chopstick drinking game). Me and Bee decided to skip the last train and crashed at Ireland's house for the night.
Woke up the next morning at 6:15 to get on the 6:30 train back to Aki so I could sleep in my own bed, take a shower, and finish packing for the surf camp over the long weekend. It was raining, and I was worried that the 3.5 hour drive would take longer and the surf camp would be shitty... but that was totally not the case. We made it in perfect time (got there at 12:20 for the 1:00 start time), and even picked up Holly at Kochi station along the way. The drive was gorgeous, if not a little abunai. Once most people had gotten there, we went over to Bruce's "Hata Surf Dojo" and suited up in rash guards and board shorts. Then we were assigned a board according to height. The rain, at that point, was really light, so it really wasn't a nuisance and only made it so that we didn't have sun in our eyes. We got to the beach, practiced balance points and then went out into the water to catch some waves (with out standing). Once we did that for awhile, we came back in to practice standing and popping up (which was by far the hardest considering my weak-ass arms). We played around in the ocean for awhile even when the rain started coming down harder. Once it got too tiring, we went back to Bruce's place to change, get showered and wait for the amazing feast that was ahead of us. Bruce made the most amazing food for us. We had pumpkin soup, pesto pasta, taco rice, home-made pizza, chicken, garlic bread, and enough beer to kill a man. I was staying with Amy, so we left a little early (10:00ish) but I really appreciated the good food, not too much beer, and a REALLY good night's sleep.
We woke up the next morning at 8:00 so that we could get ready, eat, and be at Bruce's by 9:30 to start the next lesson. During the night, the clouds had cleared and left the most amazingly blue and clear sky. It was a perfect day to be outside and we were allowed to surf with Bruce's boards until 4:00pm. I got to the point where I was so exhausted I couldn't push myself up any more (good time to stop, I'd say). Unfortunately, that day left me with a little sunburned cheeks (but well worth it). We all set up camp at the camp site and got food ready for the BBQ that we ended up having on the beach (with a bonfire!!). Me and beer buddy chatted and we all ate so much amazing meat and veggies. A bunch of us went to bed around midnight, and I woke up at about 8:15 to get things put together so we could do yoga. Yoga wasn't on the beach (as originally planned) because the sun was just so hot and direct, but we all did yoga at the campsite, and it really helped to make my muscles feel better and more relaxed.
A three hour drive later, I ended up exhausted at home (and unfortunately had to cancel some plans). Instead, me and De- made curry and watched "ダリングは外国人" which was actually the first romantic movie I've ever seen in Japan. It was sufficiently awkward but cute and me and De- had a good time laughing at it and dissecting the awkward parts. :)

Ramune chugging and an onsen belly

Saturday, instead of my awesome idea of a beach party and BBQ, we all headed up to Umaji for an onsen-dinner and drink fest with Ireland. The drive up there was a little scary (narrow mountain roads, fast trucks zooming along.... Sea screaming in my back seat ) but it was beautiful. I wish I could have stopped more often to take pictures or explore the random caves and bridges along the way up into Umaji. The weather there was also quite a bit cooler (which didn't stop me and Ireland from jumping into the freezing river water... so freshing) but the sun stayed out all day, and I'm not gonna lie, I was a little disappointed about not getting to do the totally plausible BBQ on the beach.

The next morning (after many a strange dream), I woke everyone up at 8AM, ran through the downpour to my car, and some how made it safely down the mountain in one peice (even though my car kept fogging up :<). Sunday's sports day was surprisingly a lot of fun! there were only like... 12 kids? 14 kids? So parents, teachers, and staff got to participate in just about every event. I participated in about 7 or 8 events (always with an invite from the kids). I got to show my drinking skills by chugging ramune and winning my round of drinking, as well as grab bread with my teeth and run around come cones (among other silly activities). I also got to see and talk to cute mountain teacher (even though it was only for a little while) who was adorable in his basket ball shorts. haha.

That night, Nat-chan and Ryoku-chan came over (along with Bee) to make okonomiyaki and yakisoba. We met up with Em in the super market and invited her along as well. The okonomiyaki was thus far, the best I've ever eaten. I can say that with all honesty. I feel like before this, I'd been lying and just SAYING I liked it because it was OKAY but this stuff was awesome (and had kimchi in it!). We sat around, listening to music and chatting about random stuff, and I tried to use a Japanese top with a string (almost killed Bee with it hahaha). But really, it was a lot of fun getting to speak so much Japanese and such. We also helped Nat-chan out with some English :) Good Weekend.
Posted by Indi at 8:49 AM No comments: