Since I write a lot about Japanese music and going to see shows here in my blog, I decided that my entry to the Japan Blog Matsuri this month, hosted by Cooking In Japan, and under the theme: An acrostic poem spelling out AUTUMN, was going to be band/song related! I will share one or two songs from a few of my favorite bands as well as a picture/link/some info on them! The link on the song title (italicized part) is the link to the MP3 download. The link on the band's name is to their website/myspace.

After The Rainbow; PALL MALL
LUck At Last Night; The Because
Thirsty Chords; Air-In & 少し泣く (sukoshi naku)
Undecided; FRAGMENTS
Make A Fool Of Me; ELMOC
TurNcoat; Sand In Hand & Theme Of Dead End

PALL MALL: (picture above) One of the first bands I was introduced to upon arriving to Kochi and some of my better friends here. From left to right, Kyohei (Mall), Kyosuke (Pall), and Dorami. They would fall into the Melodic Punk/Hardcore genre around here, because their songs are a bit darker, and there are a lot of screaming parts as well as the vocal melodies (vocals being both Mall and Pall). After The Rainbow is my absolute favorite song, and the have never failed to play it as their last song whenever I go and see them. I love these guys; they have dragged me along to shows, come to my house parties, and have been fun friends over my stay here in Japan. 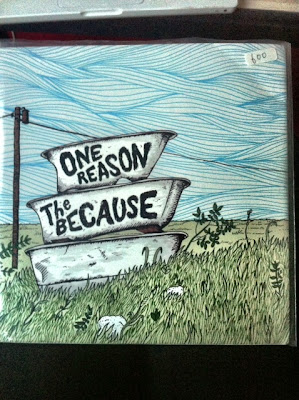 THE BECAUSE: All I have is a picture of one of their 7-inch splits with One Reason at the moment because The Because had already broken up before I came to Japan this time around (also have yet to find video). I love their sound; it's more Rock than Punk, with a dash of folksy blues tossed in (like Balladmen). Their songs are feel good and I wish I could have seen them play a show once. Luckily! Their members are now in two other bands, "Balladmen" and "The Tiffs" both of which I've seen play shows a few times in Kyoto and Tokyo now. 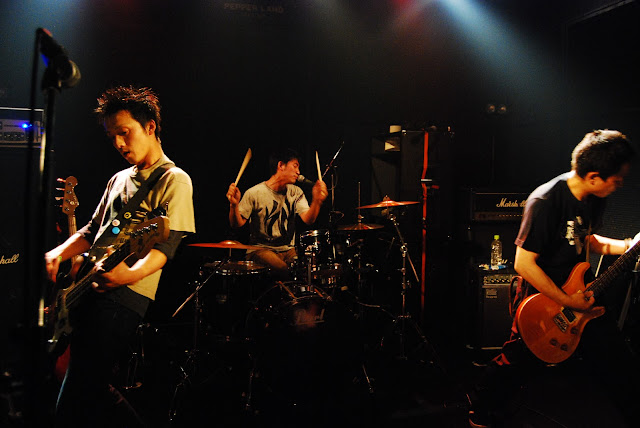 THISTY CHORDS: I could not rant and rave about these three guys enough. Just in case you didn't get to see enough of them in my last post, here is one more photo for you featuring all three of them! From right to left: Daisuke, Atsushi and Yusaku. I fell in love with the first album I ever heard of theirs called "I Continue I..." and I only wish their other recordings were not out of press (although, now that I think about it, I could always ask Atsushi about handing over some MP3s....). They would fall under the genre of Melodic Punk but with way less screaming than PALL MALL. Atsushi, as I've mentioned in previous posts, is the drummer in the band I've been practicing with over the last 2-ish months.

FRAGMENTS: Another band that is no longer together but instead scattered around three of the four prefectures of Shikoku now! The bass player is Mall (left) from PALL MALL, the guitar/vocalist is Spalding (right) from WHAT-A-NIGHT's (another awesome Tokushima band), and the drummer is Ikawa-san (center) from Matsuyama (Ehime) who plays in about a million bands (I swear, every time I see him he's in a new band playing the drums amazingly for someone new), one of which is called "Conception" and has most of it's members based in Kochi (not a fan. hardcore/wall of noise type of music). I'd consider Fragments to fall into the alternative/indi category of music these days. 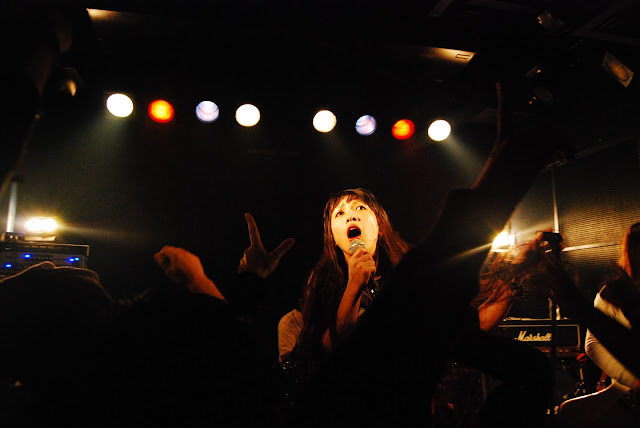 ELMOC: As I said in my last post, ELMOC are the three lovely ladies from Tokyo who we will be playing a show with in January! I've only recently been introduced to them and their music, so I'm still getting to know it a little... but I love what I hear so far!! They remind me of another, slightly older band called "Pear Of The West" that is also from Tokyo. Worth taking a listen to.

TURNCOAT: Turncoat is a supremely attractive band (hahaha). The female drummer and guitarist (Kiyomi and Sev) are the most beautiful couple I think I've ever seen. They are also amazingly nice and amazing at playing what they play. Once again, my buddy Mall plays bass in this band as well as some lead vocals. They are a Matsuyama/Kochi band and have been getting pretty popular recently, doing some shows in Kyoto and Osaka. They just put out an 8-song CD called "Raise Your Flag," which is what the two above MP3s are from. I also included the video below of them playing late last year!


Just as an added bonus, another amazing band called "Balladmen" who is made up of members from the infamous "The Because" and "Blotto," two great Tokyo Pop Punk bands that are no longer in existence. Instead, members from those bands are in Balladmen and another band called "The Tiffs." I'd share MP3's but these bands only have 7-inches out and my record player does not have one of those MP3 converter cords with it. :(

Hope that was an interesting view into my area of the sub-culture that is Japanese pop punk/melodic punk/indi bands. Obviously, there are more bands out there than I could ever think to have taken a listen to,and I've really only skimmed the top in my own region of Shikoku/Chugoku (though if I wrote out the list of bands from here I've seen/heard, it would be sickeningly long...). More importantly, these are the bands and people I've been going to see, supporting, making friends with, and playing music with over the past year. I couldn't be more pleased~