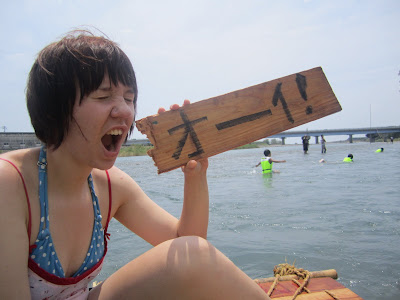 The last week and a half have been AMAZING (if you don't count the going to work part, of course). The show in Tokyo was spectacular (although a little long... if they had cut out like 2/3 bands it would have been perfect), and I was sooo happy to finally see Your Pest Band and Pear of the West Live! It was even more spectacular going to see friends from work/school and going shopping in Koenji and Shimokitazawa~ I've never wanted to live in a place so badly.... IT'S SO COOL! <3 There are tons of used clothing shops, CD/record shops, and live houses! I'd be broke 100% of the time I lived there, but I'd be the happiest poor foreign girl ever. :)

Then, in response to the above posted picture, on Sunday I got to go to a river run with Nat-chan and the gang. We had to build our own rafts and float them down the Ioki river. The run was a blast (and not to mention thrillingly dangerous at certain parts) and then we had a self-contained nomikai for 5 hours after the run. I got some sun burn on my shoulders and back (which feels like someone is cutting off my skin with a dull knife when I put a shirt on..) but it was totally worth it to spend the day with my awesome Aki-city friends. <3