First Session of the "Passport lunch and Onsen Club" 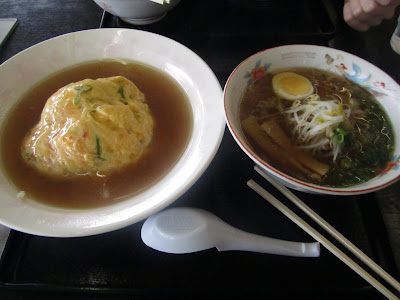 I found this book at Lawson last week called "Lunch Passport" to Kochi. In a nutshell, it has 77 restaurants from around the city that between April and October are giving lunch and dinner specials for 500 yen (from whatever price they were before). Cheap, right?! Since me and De- have been wanting to try different restaurants and cafes around the prefecture, we thought that this would be a good challenge (to try and hit as many as we can in the allotted time frame). Today, we went to めん＊ぱる, a ramen shop right off the 55 in Noichi. The above lunch set is what they offered through this service and it was AWESOME. Soo satisfying and chinese-y tasting (the egg soup thing especially had the best sauce).

Then, we went to an Onsen in Kami City called Kohanyu, which was a super tiny onsen with a pretty popular looking cafe (had a really yummy cake-set and coffee after the bath). It was really far off into the mountains, but the ride up there was really beautiful and scenic (though my car was running low on gas and we happened to take the road that was about as big as a side-walk). The bath only had one "tub" but it overlooked the gorgeous river and was open-air so totally worth the 900 yen it cost to go in. I think this will be a nice weekly tradition for me and De-. :D Lunch and a bath~