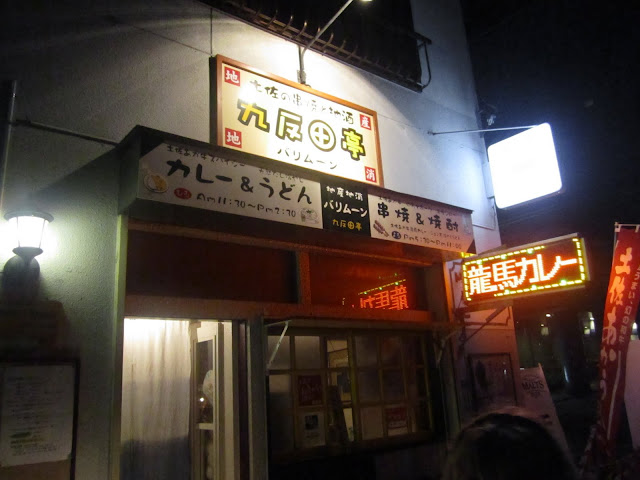 Second installment of the "Passport Club" happened yesterday night when Nat-chan had softball practice instead of our weekly "ryori kyoshitsu" and movie watching Tuesday (it was sunny out instead of raining like it has been). Instead of with De-, I went with Sea, Juri, and The Brit to this cute little place called "バリムーン” or Bali Moon. Sounds like exotic curry, right? Wrong! But the set meal that they offered for 500 yen was pretty decent. It came with a side salad, "Ryoma Curry" (which is supposed to be on the spicy side. This one was the perfect amount of spicy in my opinion), and "Jon Man Udon" (I assume Jon Manjiro...?). I agree with Juri when she said that udon has that "Natsukashi Japan-smell" to it, since it's made of SUCH Japan-esque ingredients (dashi, udon noodles, those pink fish noodles, green onion..).

I had some issues with the owner at first, however, because he seemed to think I was incompetent and didn't know how the passport functioned. I suppose I can understand, that if four foreigners walk into your restaurant wanting the set-meal and only one holds the discount-giving item, you'd think they ALL want the discount.... but after I had already told him IN JAPANESE that I understood only I'd get the discount, he still bumbled over and pointed at the "使い方" area in the front of the book. That just irritated me, and since I had had a rather sour class with my 6th graders at Ioki that day (oh man have those kids gone down hill in motivation), I got snippy a lot faster than I normally would and said, "もう分かっているよ！" and proceeded to explain in clipped Japanese that I KNEW I was the only one getting the damn discount. GUH. At least that didn't spoil my lovely dinner with friends too much.

Speaking of class.... I have found that the ONE game that will get even the evilest of classes excited and participating is "English Baseball." Seriously, that game is magical. As soon as we start playing, kids start cheering for their team, get super competitive, and actually want to know the words they have to spit back out at me. If I can get kids arguing about who said "take a bath" the fastest, my job has been done for the day. LOVE IT.
Posted by Indi at 10:36 PM