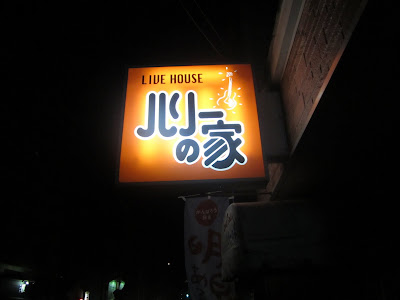 We had our first live show on Saturday night at De-'s Kikusui Charity Event. Considering I've never done this before, once we started our set, all my nerves went away and I just got absorbed in the music. I, of course, was also sobered immediately by the adrenaline running through me.... but that's a different story. It was probably for the better, considering at one point I forgot the first line of "Lawrence and Kenmore" and had to ask Matto before we started. Haha. It was just really neat being on a stage like that, under hot blue and red lights, playing awesome music with your friends. Every time I'd look over at Mall he had the cutest smile on his face, and Coppy's drumming face is just to die for because he looks so fucking happy and excited. 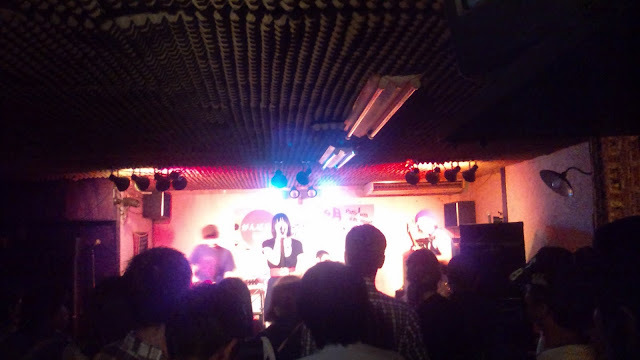 I'm just really happy that Tomokazu, Dorami, Hiro and Yousuck came to see us play. Even though Yuu came late, I'm glad he made the effort and got out there (LAME. the battle continues...). Tabineko's performance was great too (as per usual), and I was happy to be able to escape to the outdoors and smoke instead of see the last band, "The Jelly Beans." They were hippies from Osaka and just.... not any of our cup of tea. They also played for like.... 40 minutes or something ridiculous like that.

The art work also turned out amazingly, in my opinion. Coppy's painting (which I bought もちろん）was soooo cool looking and Abe's bags were really clever and well-done too (he used the slogan "明日があるさ" and kinda turned into into a depressing phrase with his image, hahahaa). I'm really glad that Kikusui got a good amount of money for the auction items, but it's too bad there wasn't a little more to auction off. If this had had more time to generate interest, there might have been more stuff to sell (as well as more people.... the place was cramped and crowded to begin with).

BUT ANYWAY... That had to have been one of the best nights since coming here. Although I had to see a disgusting number of THEM (luckily, only 2 of them saw our whole performance and only 6 saw the last song) once the performances and the auction was over, we all (Whiskey Suicide, Abe and Hiro) made our way to York and drank until 4AM. It was rather impressive how late we stayed out.... but I had an awesome time talking to Coppy (in particular) Matto, Mall, and Chisel... and we all even talked about going on tour this summer. GAH. How fun! :D Also, beer tasted SOO amazing that night after we'd been drinking shitty sake-rum. :P Can't WAIT until our first real show at Chaotic.