On the lash again with KFC~ 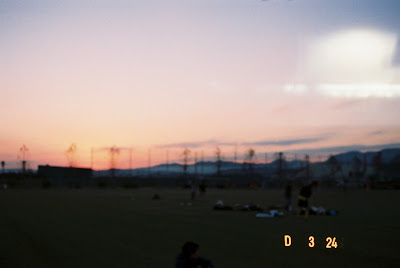 I've been converted. I honest to god enjoyed playing and watching soccer this weekend and it was amazing.

Me, Sea, The Brit and Tall-Matt drove to Awaji Friday night, arriving at the hotel after getting lost a few times and parking on two.... TWO lawns (笑). The banter began as soon as everyone was situated in a hotel room (we were in a sports hotel, so they had four beds crammed into one room that would be the size of a single in the U.S. Not so bad, just very cozy and warm). Scotland presented the shirts, talked about the next day's line-up, and got the excitement started for the next day's games. I went to bed earlier than everyone else because I was just feeling the drag of the previous week.

We had to get up bright and early at 7 to get breakfast and head over to the pitch. We all looked amazing in our obnoxiously bright yellow stripes, and we were even greeted by other teams with a "OMG! KFC! So glad you guys are here!!!" I guess our reputation preceeds us. Girls played the first game of the morning, and it was... sad, to say the least. We aren't great at soccer but we have some stunning spirit and enough genki to kill a man. We lost 8-1, the only goal being scored by MY LEG (the goalie from the other team had kicked the ball away from their goal, it bounced off my leg and rolled right into the goal. beautiful, in a word). Some how I adopted the position of forward (how the HELL did that happen?) and ended up running like a mad-woman all Saturday long through our other two games.

The boys did much better, considering they had a NUMBER of players that had actually been on soccer teams previously. They slaughtered in their first game, 6-0; tied their second game; and lost their last two games of the day by a small margin (6-4 in one and 5-4 in another I think). While they played, the rest of us cheered, danced, sang the KFC song (we're on the lash again, where is the meat raffle?), and banged on the drum Scotland stole from his elementary school. We were the noisiest team on the fields all weekend.

The evening consisted of a terribly fun "awards ceremony" in which the captains awarded certificates to some players (I got "woman of the match" for getting the first goal with my leg) and awarded penalties to everyone in the form of pink slips and shots of tequila. My penalty was studying Japanese during breakfast on Saturday morning instead of studying soccer strategy. The rest of the night was great, and although it only involved going back and forth from the combini twice and having a dance party in the lobby of the hotel, we were proudly on the lash and enjoying every minute of it (and although there was lots of fraternizing with the enemy... good times were had).

Sunday was rougher. I was exhausted on my 5 hours of sleep (but NO hangover ;D) and I could hardly move my legs... luckily we only had one game and it wasn't until noon that day. The poor boys had the first game at 9:30, and then won that game and had to play semi-pro Osaka 4 minutes later. Needless to say they lost the 2nd game, but it was still great fun to watch them run their asses off and be brought to victory at least once. Lovely weekend. I will now think twice before I say "I hate soccer" again. ;) 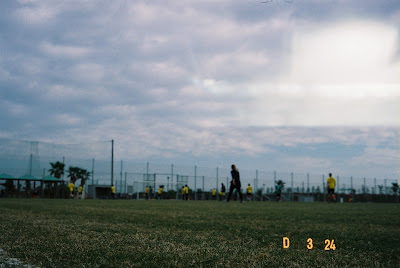