This weekend went by in a blur. 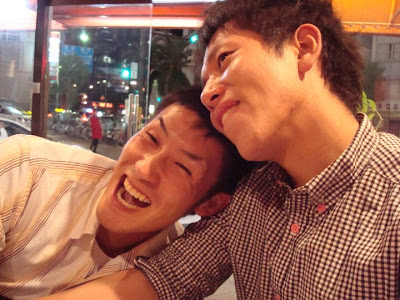 Best way to start off the weekend was by going on a GROUP DATE. Yes. De-'s friend Kei (who she met at Music Lovers) suggested that she get 3 friends, and he bring 3 friends so we could do a 4 on 4 boys meet girls at an Izakaya in the city. In Japanese, this is called a "gokon." It was rather nerve wracking to begin with.. we had to do little self-intros and English became the secret language for us three foreign girls. However, as soon as intros were over and the food was served, we all had a chance to relax and feel more like ourselves. All in all, it was fantastic fun with 4 very attractive, young, Japanese firefighters from Susaki. We went to 3 places that night, including the original izakaya meeting place and two cute bars in the city.

Saturday night, me and De- drove into the city to meet up with Orlan, The Brit, Juri, and De-'s co-worker Chisel. The night started out with a delicious yaki-niku dinner at a place called "Gyu." After dinner, we all went back to The Brit's to costume ourselves up and then headed over to Hirome for the party. I was amazed by how they transformed Hirome... it was really cool! There were live bands, DJ's, awesome decorations and great dance lighting.  Before we entered Hirome, Orlan kept scaring girls by running up with his joker costume (ligit creepy but awesome). I ended up meeting a couple of girls who were really nice and wanted to hang out in the city sometime!

After the party was over, we went to Chisel's friend's bar on Sunday Market Street for a bit of a drink and some ramen. Although I wish we had gone to the club everyone else was going to instead, I was glad to go home around 3:30. Extremely exhausted.... (Also, Chisel had found this creepy guy that kept following us around and wanted us to stay out later with him because he hadn't been to Kochi in 15 years.... weird).

The next day, me and De- drove home and I baked and cleaned all day until around 7 when I went over to her place to cook some stew. It was nice just to chill out and chat after such a busy weekend. We also made a playlist for her awesome birthday party we'll be having later this month at my house. All-in-all. Good Halloween weekend. I'm surprised at you, Japan. I didn't think you had it in you. ;)
Posted by Indi at 2:54 PM