Wow, I've been busy and unmotivated to write in here. I have to remind myself this is a good place to just write down a recap of things that have happened so I can keep a hold of them even once I'm gone.

This last week was pretty decent. Bee went on her trip to Taiwan and so the office was pretty quiet and boring... I did battle with my Supervisor over internet websites that brought me to tears on a number of occasions (which got us back amazon, gmail, and part of FB back to the office). Other than trying to stave off boredom by studying and watching HIMYM, I was bought a bunch of "Kochi Fighting Dogs" paraphernalia by the office men.

Starting Thursday at 11AM, I was picked up by Ang, Steph, and Em and brought to Kochi City for a few days of AMAZING orientation. <3 Orientation started off pretty generally. We learned about saftey, laws, driving, ect... also went over the Nankai Jishin that's due to hit in the next 50 years (which will completely submerge Aki under a tsunami). It was nice meeting some new people and seeing people I hadn't seen since Tokyo Orientation. At night, we all went to a Beer Garden on the roof of this hotel and got all-you-can-eat/drink for 3 hours. Oh man... greasy food and as much beer as I could drink. It was fun, to say the least. After the beer garden, a huge chunk of us (30ish?) went to the afterparty and went Karaoke-ing. We ended up at this place called Kapara (after about an hour of shuffling around Hirome and a lot of tugging drunkards around). Kapara had a room for us that spanned two stories, and was honestly the swankiest karaoke room I've ever seen. Beer, umeshu and chips kept coming to the room for over two hours (only 2000 yen!!!) and everyone was so out-of-it the singing was honestly just a scream fest by the end (but I still got to sing a few of my favorites with Sea and others). At one point, 4 or 5 people started playing Jan-Ken-Strip... until it was announced over the speakers and they rushed to get their shirts back on....

After Karaoke, we all stumbled our way over to Van Burger... which was just about everyone's last stop for the night. It was really gross.... I don't know why I got that burger. I think that it might have been good if it hadn't had SOOO much mayo on it... but he literally POURED the mayo onto that burger. Needless to say, the next day most of us were pretty hungover. We struggled through some more useful information, ate the most amazing pizza I've ever tasted in Japan, and had a scavenger hunt! Most people didn't like it... but I had fun. My team of 4 won (we won cute little cat towels) and I got to know the main part of Kochi City a LOT better because of it. After orientation was over, me and Sea got a hotel room at "The Los Inn" and went to dinner with everyone at an Indian Restaurant in Hirome (DELICIOUS) and soon were on our way with the pub crawl. Honestly, the crawl wasn't the best... I wasn't expecting the prices after being fed so much beer and liqueur for so cheap up until then, but we got to see the location of 4 other bars (including this REALLY cool one that was down a sketchy alley) and went to TWO clubs. The first, Love Jamaica was boring due to the nature of Reggae music... but the second club was FANTASTIC. Exactly what I wanted from the night. Me and Sea ran to a combini and chugged some cheap drinks to finish the night off (2:30 AM). 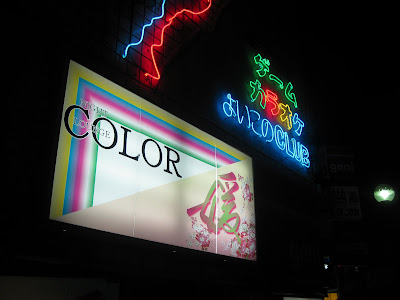 The next morning we got up at 9AM in order to get to the SPORTS day happening in Josei Koen from 10AM. I got to play rugby and soccer for 4 hours and then chill at home. Sunday was another sports day, and I got to (sorely) play ultimate frisbee and due the most intense yoga I've ever been involved in. I almost died slipping on my mat I was so sweaty! After which, of course, we ate a CHAMPION dinner of yakiniku (to DIE for).

In addition to getting internet Monday evening and FINALLY doing something in my job..... I'd say it was a fantstic weekend. :D Looking forward to Osaka this next weekend~
Posted by Indi at 1:28 PM