Phew~ What a busy week it's been! After an exhausting 8 hours in the studio on Sunday, I've had to phone and e-mail with our band members in Tokushima everyday about what things we want fixed on our new 11 song album. What sort of parts we want mixed better, what parts we want brought to the forefront, what vocals we want softened, what we should do with the lyrics booklet/cover designs I drew, etc.... I even had to drive all the way back to Tokushima on Wednesday to re-record one track (a song where I have aprox 30 seconds of vocals) because the computer decided to delete the damn thing (though our producer cutely said it was because the computer was so surprised a foreigner was singing Japanese into it that it's brain died for a minute). Although, I must admit that even though I had to drive 4 hours round trip to record 30 seconds of vocals, I'm really really proud of what we created, I got the first burned copy of the tracks, and I was taken out to dinner by our producer and fed the most amazing yakitori (that, and getting our guitarist drunk enough to start spouting hilarious English phrases like "Oh Gyoza, get into my mouth. I won't use my teeth, I'll just use my tongue. Get into my dirty mouth" is always worth a 2 hour drive).

Other than that craziness, we plan on having our last practice tomorrow before looking forward to 4 weekends in a row of shows!! Yay!! After this month of shows, we'll have completed the island of Shikoku ;) 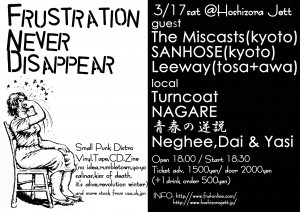 So anyway.... even though it's not all completely finished, I want to share one track from our album with you guys! The song is called "Friday Night Drinking Song" and it is destined to be the first track on our album. The sample at the beginning is from "Blues Brothers" if you weren't sure~ ;)

Friday Night Drinking Song; Leeway
Posted by Indi at 9:49 AM