It's been awhile since I've written a "Japan 30 Day Meme" blog post, but I think this one is my favorite prompt thus far!

I think I can safely admit that I am a bit of a shop-a-holic. While I am definitely no where near clinically-diagnosed bad (shopping can be just as addictive as gambling or alcohol), I still do have the tendency to buy things I don't need and spend money that I really should be using on rent or food on buying a cute new dress. The thing about Japan, as anyone who has been to the country is well aware of, is that there are cute dresses, shoes, bags, and blouses exploding out of every shop front and crevice available for use. Styles and seasons change quickly, and once one thing goes in fashion it's everywhere and then no where in a flash. I love Japanese fashion, but I don't make that much money, and can only splurge on a few nice things every once in awhile. 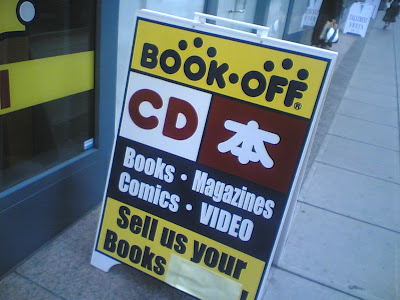 The other thing about Japan that I like is their access to nice quality used shops. Everyone and their brother has probably heard of the chain "Book-Off" if they have any experience traveling or studying abroad in Japan. They've even started opening stores in the US! If you don't know, Book-Off is a used book store where you can find used (and in very nice condition) books, comics, magazines, CDs, DVDs, and video games (sometimes the consoles too). They have walls of 100 yen comics and books, and you can usually find what you're looking for in a Book-Off somewhere near you and at 2/3rds the cost (at the very least). 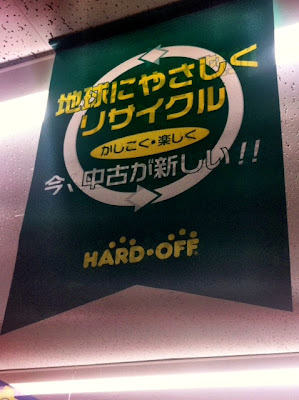 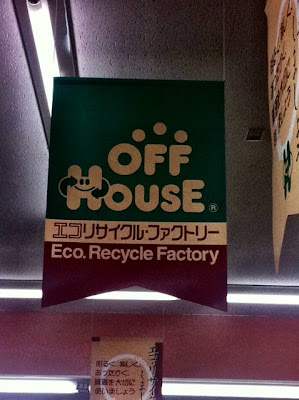 Now, something I'm not sure everyone knows about Japan. There is not only Book-Off. In fact, the "Off" chain of stores (if you can call it a chain...) has a bunch of different resale shops! Among the stranger include: Off-Garage (car stuff) and Golf-Off (...obvious?). My two favorites are the magnificent Off-House (used clothing, furniture and house wares) and Hard-Off (PORN SHOP!... no it's electronics, DVDs, games, CDs, and musical instruments). I have spent countless hours going through the racks in Off-House and coming across 300 yen adorable dresses and skirts. Not to mention the fact that half of the furniture in my house is from Off-House (4000 yen yellow couch, 800 yen lamp, 500 yen lamp, 3000 yen bamboo bookshelf.... the list goes on). On the Hard-Off side, I can thank them for my lovely blue acoustic guitar (6000 yen) and a number of fun film cameras I've been collecting (nikon FE for 6000 yen and toy camera for 300 yen that takes really fun pictures), as well as most of my electric guitar accessories (picks, strings, and input cables).

On the same line as Off-House, I also love to frequent the two other used-clothing chains called "Jumble Store" and "B.J," which I'm pretty sure they have all over Japan (I've seen them in every prefecture on Shikoku at least). The clothing that they accept for those places is of amazing quality and basically brand new. While these type of "furugi-ya" can run a bit expensive, if you look hard enough, you can find cheap gems everywhere. The existence of these stores, and the high quality of clothing they provide, while maybe not the latest fashions, has made it rather difficult for me to resist the urge to spend my yen when I step foot in them. :P