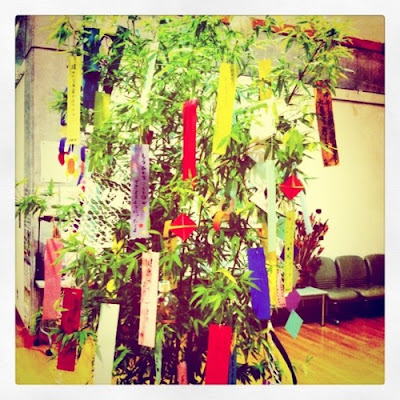 Today is tanabata (and a rather bleak, rainy one at that), which is the festival/event based around the "meeting of two lovers" that are represented as two stars in the sky. It's probably best to just Wiki that rather than have me get into some sort of weird explanation... but the fun part of the day is that you're supposed to write wishes on pieces of paper and tie them to trees. During Japanese class last night, we all wrote out two wishes and tied them to the tree in the international center. In all the years I've been studying Japanese, I've never done this before! I've only ever read about it or seen pictures/video of people doing it... so I know exactly what you're supposed to write and the style in which you write it (〜ように), but have just never performed the ritual. Not terribly exciting, but it was nice to write out a goal I want to attain. My wishes were:


日本語を話す時に自信が持ていますように
and
やる気ができますように
The other fun thing we did in Japanese class is talk about this letter writing contest. Along the theme of 「明日」you're supposed to write a letter no more than 40 characters long. Our teacher wants us all to enter the contest and so she was showing us love letters from a book where all the letters were within the constraints. Many were really lovely and cute. I want to share a couple of the letters and maybe practice writing my own today.
フランスが遠いのではなく、
私の心が届かない、
あなたの心が遠いのです。
(France isn't far, My heart can't reach you, so your heart is far)
あの日あの時走りに走ったが走りきれなかったよなあ。
お前そんなに泣くなよ。
(On that day, at that time, I couldn't run fast enough. Oh how you cried.)

昨日私の想い送りました
今日私の愛届きましたか
明日あなたの心待っています。
(Yesterday I sent my feelings. Today my love reaches out. Tomorrow, I await your heart.)
「かわいい奴だ」のあなたの言葉に、
ついついかわいい奴になってしまう私です。
("Aren't you cute" you said, and unintentionally, I acted as such.)
つらいのは、
会えないことよりも、
君の笑顔がすぐに浮かばなくなったことです。
(What's difficult, more than not being able to see you, is not being able to imagine your smiling face.)

Email ThisBlogThis!Share to TwitterShare to FacebookShare to Pinterest
Labels: holiday