Day 02 – Describe your neighborhood in Japan.


Welcome to Aki-shi! Aki is a small city an hour east of Kochi City (biggest city in the prefecture) and has about 20,000 people living in it. It sits right against the ocean, in front of the mountains, and has 6 stops on the Gomen-Nahari train line. Aki is made up of a number of different sub-villages that decided to combine to be one large city within the last 10 years. All of the schools in Aki are named after the area that they reside in but there's about 15-20 sub-villages within the city limits. (Everything on the English wikipedia was written by me on a boring day at work, so I am the self proclaimed internet-expert of this city, heh~)


Aki is well known for producing eggplant, being the birthplace of Iwasaki Yatarou (the founder of The Mitsubishi Company), having the Hanshin Tiger's training camp, and making a dish called "chirimendon" which is rice covered in green onions, thinned soy sauce, and the tiny tiny dried fish with forever-glaring eyes.

I live right by the main train station, behind the fire station, and within spitting distance of four different clinics (foot, general, eye, teeth) and a really delicious bakery. Yum~

There is also a really cool cave in the sub-village Ioki. It honestly looks like you've just stepped into Jurassic Park or something. You can't hear the noises of the highway anymore and it's just gorgeous and green. 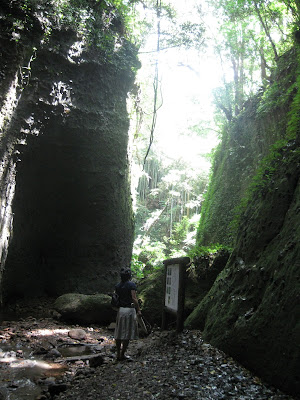 Among the many different festivals that happen in Aki, my favorites are the Annual Yosakoi festival and candle festival. Yosakoi is Kochi Prefecture's famous dance-festival that happens for a week every year in the city. The Aki-version happens a week prior to the bigger festival on a Sunday where they set up the usual festival booths and have teams dance in this large "city square" area. The candle festival is a night festival set up in order to celebrate Iwasaki Yatarou's birthday. People parade into the area in front of the station with candles, hand-made candles sit all around the parking lot, musical groups perform, and all the local restaurants have food booths, selling things like cheese cake and hot wine. It's near Christmas time, so a lot of the surrounding houses have "illuminations" set up, and a few of the trains are decked out in snowflake lights as well. And that is Aki-shi! Although it's a little too country-side for my taste.. it has its fun things, its beautiful things, and of course, some of my best friends :)