Last night was soo much fun! Me and Bee got to hang out with Nat-chan, Shu-chan, and Ryoku-chan and went to Yasuda to play Badminton! I used to love to play badminton in high school, so I was REALLY excited about playing again; especially with people who wanted to play/play in their free time. The Yasuda gym was simply amazing. It was this giant dome out in the mountains (never would have guessed something so new and pretty was out there) and had a huge basketball court where you could rent out sections and play for a few hours with the gym's equipment. We all played for a few hours, and even had a bet on one of the games in which juice was rewarded to me and Nat-chan at the end (because we dominate, of course).

Later, we went for Ramen at 2niban, which I've been wanting to try out for awhile now. They had kimchi ramen and since i've been on such a kimchi kick recently (with my kimchi bento and the kimchi nabe I had at S-Ono's the other day....) it was a perfectly spicy yet salty and amazing ramen. Very happy we got to go there. The 2niban set looked massive and beautiful, and included gyoza and chahan. :) After 2niban, we all went to Ryoku-chan's house and played the New Super Mario Brother's Game, which I'd never played on the Wii before, and was actually really hard. Since there was 5 of us and only 2 wii-motes, we ended up switching off between levels and/or deaths haha. It was so much fun, hanging out like I usually do with my friends back home... it actually made me feel really welcome finally. I finally felt like I had a little place here, with some nice friends, in this alienating country. I'm so glad I kept pursuing friendship with them; it's hard sometimes to make Japanese friends when you aren't perfect at the language, and I felt like the time I'd been taking was paying off! 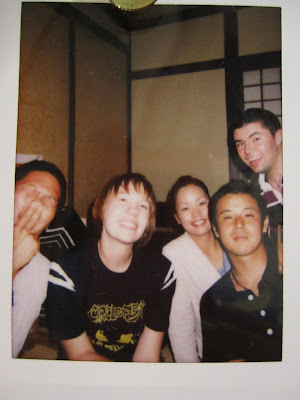