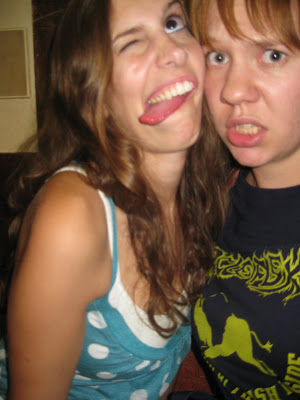 I never though 14 people could spend so much at a restuarant... but our rag-tag and drunken group managed to spend 500 and some odd dollars at our favorite Aki izakaya last night. I'm pretty sure it was because of all the "giant" orders of beer rather than the quantity of food... and there was so much food that I tried for the first time. I had this wonderful sashimi in a tare sauce, and "Korean Ramen" which was fantastic, even though I thought the giant raw egg on the side looked suspiciously gross... I even tried the natto that was ordered which ended up mostly tasting like spicy mustard.
After divying up the bill, most of us went over to Karaoke at Pieno, and partied it up with a bunch of young nihonjin that shuji knew. I had fun screaming karaoke at evey opportunity I could. After karaoke and more drinks, the people staying at my house came along with me and we went back to my house after picking up De- along the way. Since Steph was sleeping, we grabbed some drinks and sat outside for awhile before going to a combini to get food and stuff. On the way back from the combini (after taking copious amounts of pictures and posing for some odd photobooth) we visited my car along the way. While I was petting it, the car (which had been suspiciously running near us the whole time) opened, and a guy leaned out and vomited on the pavement. We took that as our cue to leave, and went back to my house to sit, talk, give massages, and watch "super bad" until 4 in the morning. Good night~

Saturday, me and De- went to the beach after everyone cleared out of my apartment (and me and Sea made pancakes). It was sooo relaxing to just sit, study a little, talk, and take a dip in the water. It was a little chilly, but seriously perfect weather for relaxing. At around 5:15 Sea came to pick me up to take me to Geisei for the Taiko festival! Our muroto Taiko group was performing and although me and Sea didn't get to join in, it was fun to sit on the beach and watch the performers. There were some REALLY cool groups who danced around and wore masks and really made a performance out of it. :) It got a little cold on the beach, however, and after it was all over at 9:30, me and Sea weren't aloud to go to the enkai and instead watched "Up In The Air."

Sunday was also a good day. I went to Ioki E.S's sports day from 9:15-12:00 and only had to participate in the PTA tug of war with all the other teachers and parents. That was actually pretty fun. The kids were also ridiculously cute and I was mesmerized by the strangeness of the whole event (like kids on unicycles and climbing poles.... and the big band version of "thriller"). After sports day, I was picked up by De- and we drove into Kochi for the Sunday Market, and Yoga. It was nice getting cheap veggies, and finding some hidden shops to explore in Obiyamachi. Yoga was also fantastic and felt sooo amazing after feeling tired and achey all day. It was a lovely way to end a good weekend.
Posted by Indi at 10:33 PM